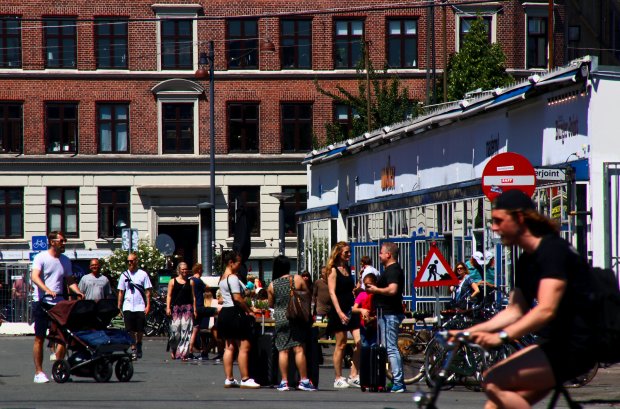 Find hand-picked restaurants in Kødbyen with the restaurant service EarlyBird.dk and get 1/3 cut of the price.

Vesterbro has undergone a major facelift in the last two decades, and is now one of Copenhagen's most hip areas - something the steadily rising house prices in Vesterbro also testify to. What especially helps to make Vesterbro an attractive gem is Kødbyen.

Once the meat city was - as the name indicates - Copenhagen's meat production, but today the Meat City houses some of the most renowned, hip galleries in Scandinavia, high-end nightclubs, bars and modern, innovative restaurants. The raw, unpolished industrial facades have been preserved, while the interior has been renovated with respect for the original rustic industrial style.

See here which restaurants in Vesterbro you can eat at tonight with 1/3 cut of the price!

Authentic Italian dining in a cozy setting by Kødbyen.

At Halmtorvet, close to the vibrant meat district, Kødbyen, you get an authentic dining experience that offers delicious Italian delicacies. "The Italian social dining bar" reaps 4 great stars in Berlingske, i.a. for his creativity in the kitchen, where inspiration is taken from the boot country's various regional dishes.

The public offers an atmospheric setting - eat and enjoy Italian drops nicely laid back and have a chat with the staff about the Italian delicacies that are carefully selected and imported home from Italy.

The name Mangal means ‘to grill’, which is exactly the form of cooking that the ingredients at restaurant Mangal come through. In addition, fresh Turkish cocktails, matched the menu.

As the name suggests, it is the primary cooking utensil on the Coal grill. Here in Kødbyen, the facets of taste are of a multicultural nature, and at Kul there are no culinary dogmas or limiting concepts. From Asian undertones with dashi, wasabi and coriander to classic steak bearnaise, the menu features elements of the most interesting from different continents.

Restaurant Kul has received 5 stars in Berlingske and 5 hearts in Politiken.

There is plenty of meat on the menu in Kødbyen. At restaurant MØR, quality meat, fish, poultry and vegetables are prepared on dancing flames, with barbecue, charcoal and smoke. The culinary focal point - the Argentine KOPA grill, sits in the middle of the open kitchen, so guests can watch their meal be created and smell the grilled tones that awaken the mouthwash. The choice of raw material is based on consideration for good taste and animal welfare.

The story of Kødbyen

The combination of culture, food and music has made Kødbyen one of Copenhagen's absolute favorite go-to urban areas. It is now no longer the hub of meat production, but instead food festivals, flea markets and cultural events. Every little Friday, Friday and Saturday, young, style-conscious Copenhageners flock to Kødbyen’s delicate nightclubs, where the music often draws threads back to the nostalgia of the 80s.

Kødbyen consists of resp. The White, the Gray and the Brown Meat City, depending on the color of the buildings.

The urban area has its origins in the late 19th century, as a central part of Denmark's industrial flourishing. At that time, Kødbyen was far from the center of Copenhagen, but was to be the hub for meat production in the Copenhagen area via a nearby railway. In fact, Kødbyen was pr. law the only place where slaughter had to take place in Copenhagen for many decades.

But from the 1930s, meat production was moved outside Copenhagen, when the capital during industrialization had had such strong growth that Kødbyen was no longer far from the center of Copenhagen, but was an integral part of the capital. Kødbyen’s premises were therefore rented out to various smaller companies, until the aforementioned facelift of Vesterbro was initiated in the mid-1990s. After the turn of the century, Kødbyen was designated as one of the 25 national, industrial monuments worthy of preservation, with special significance for Denmark's architectural cultural history.

When the British design magazine Wallpaper named Copenhagen the best city in the world in 2016, Kødbyen was also highlighted as one of the factors that made up the result with good restaurants, bars and clubs and a neighborhood that has its own character. Meat City is thus recognized around the globe, and there are many exciting dining experiences to explore - even with 1/3 cut of the price when you order through Early Bird.

If you are looking for restaurants in a specific district in Copenhagen, you can find inspiration through our guides here: